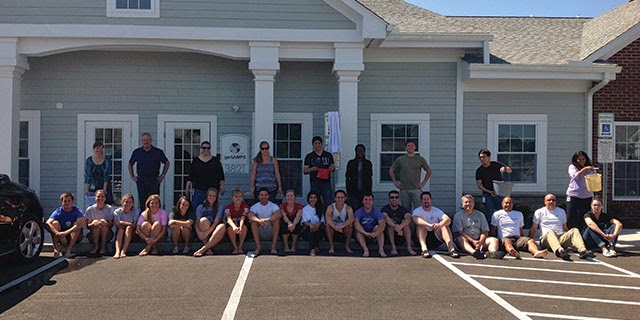 By CAROLINE ELDRIDGE
2014 was an eventful year for geoAMPS. Aside from nine new clients, attending numerous major conventions across the country, expanding our home office, hiring 15 new employees, and being recognized as one of the healthiest workplaces in Central Ohio, geoAMPS expanded its community outreach. Through its efforts and contributions to charitable causes, geoAMPS made assisting the less fortunate in the Central Ohio community a company priority.
geoAMPS donated to eight different charities, raising more than $9,400 and donating over 3,000 items, such as toys, food and toiletries. The selected charities include American Red Cross, Asha Ray of Hope, the ALS Foundation, Mid-Ohio Foodbank, American Cancer Society, local veterans’ programs in Powell, the Salvation Army, and the Humane Society of Delaware County.


geoAMPS is a technology company in the Columbus, OH, area that specializes in software solutions to manage land rights and infrastructure assets. The company offers11 industry-specific, highly configurable software products that reduce project costs and increase organizational efficiency by standardizing and automating processes.
The Humane Society of Delaware County (HSDC) was selected as one of the first charities geoAMPS employees donated to through a company charity fund throughout the year. The employees voted on which charity would receive the donations collected.
HSDC is non-profit organization dedicated to helping abused, neglected and homeless pets find permanent homes. HSDC serves and protects animals by conducting cruelty investigations, providing humane education, operating a low-cost vaccination and wellness clinic, and reducing pet overpopulation through a low-cost spay and neuter clinic.
geoAMPS donated over $662 to the Humane Society of Delaware County this year. Its donation made geoAMPS a Gold Sponsor of the organization.
In May, geoAMPS employees attended Power of the Purse, an event organized by the American Red Cross of Delaware County to raise money to support its programs. It is the biggest annual fundraiser for the Delaware County chapter of the Red Cross. geoAMPS raised $3,400 for the charity.
“geoAMPS is pleased to take part in an event that makes such a big difference in our community,” said Leena Madan, Chief Operating Officer of geoAMPS.
Following the success of the Power of the Purse event, $350 was donated to Asha Ray of Hope, a non-profit community-based organization that works with victims of domestic violence in the South Asian Community.
In September, geoAMPS accepted the Ice Bucket Challenge. This event was a creative way to raise money and awareness for the ALS Foundation. Eighteen members of the geoAMPS team, including Leena Madan, accepted the challenge and were doused with buckets of water and ice.
geoAMPS raised $140 to help the ALS Foundation in its fight against amyotrophic lateral sclerosis.
“This was a fun way to join as a team in support the ALS Foundation,” Leena said. “The Ice Bucket Challenge is just one of the activities geoAMPS participates in throughout the year for charitable causes and the community.”
In November, the geoAMPS team focused their efforts to raise money for two more charities: the Mid-Ohio Food Bank and the American Cancer Society.
geoAMPS members were separated into teams in hopes of collecting the most food items to donate to the Mid-Ohio Foodbank. This organization works to keep food shelves stocked for a network of 500 emergency food pantries in Central and Eastern Ohio. They provide 121,600 meals a day. The geoAMPS team donated 3,625 nonperishable food and toiletry items this year increasing the amount from last year’s total by over 2,000.
The men of geoAMPS showed their dedication to raise money for the American Cancer Society by participating in the popular “No-Shave November” fundraiser by growing beards. In total, the geoAMPS men raised $1,335.
“No-Shave November” is a web-based, non-profit organization devoted to increasing cancer awareness and raising funds to prevent cancer, save lives, fund research, educate and assist those fighting cancer.
Finally, in the month of December, geoAMPS participated in the Salvation Army’s Adopt a Family program for the second consecutive year. This annual program pairs families with corporate sponsors, church groups and families who “adopt” a family and fulfill their holiday wish list. This year the team bought over 36 presents for a family of six.
The geoAMPS team will continue their passion for charity into 2015 by deciding which charity to donate their annual charity company fund donations to. When decided, $4,104 will be donated.
Caroline Eldridge is Administrative Assistant for geoAMPS. For more information, call 614-389-4871 or visit www.geoamps.com. geoAMPS also offers a Canadian website, www.geoamps.ca.
This article also appears on:
Renewable Energy World