Leena Madan, Chief Operating Officer of geoAMPS, was honored during the sixth annual Ohio Diversity and Leadership Conference as one of the 2013 Most Powerful and Influential Women of Ohio. 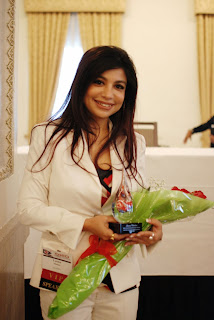 She received the award from Dennis Kennedy, Founder and CEO of the National Diversity Council, and Jeanetta Darno, SPHR, Associate Vice President, Diversity and Inclusion at Nationwide Insurance.
Leena was one of only nine women from across Ohio selected to receive the award. The recipients were honored during the conference, held Oct. 24-25 at The Westin Columbus Hotel in downtown Columbus.
“It is extremely humbling to join such an accomplished group of women selected to receive this award,” she said. “I want to extend my sincere thanks to the National Diversity Council.”

geoAMPS is a technology company in the Columbus area that is in its third year of operation. In her executive role, Leena is a key decision-maker in the daily operation of the company. Through her leadership, geoAMPS has established itself as the leader in creating software solutions to manage land rights and infrastructure assets. The company is revolutionizing industries by leveraging online, offline and mobile technologies within the land rights, infrastructure assets and data management markets.
geoAMPS customers are located in several states and the company has expanded its client base into Canada. The phenomenal growth of geoAMPS is a direct result of successfully establishing a reputation for high quality of products and services. That success is due in large measure to Leena’s talents and leadership.

“Leena’s knowledge of the market and industry, vision and oversight of geoAMPS departmental teams have positioned the company as the go-to software vendor for managing land rights,” Yogesh Khandelwal, President and Chief Executive Officer of geoAMPS, said. “Her hard work and commitment have made her a force to be reckoned with in the industry.”
The award recipients represent a wide range of industries throughout the state. In addition to Leena, 2013 recipients of the Most Powerful and Influential Women of Ohio award are:
Jennifer Belt, Partner, Shumaker, Loop & Kendrick, LLP
Dr. Greer Glazer, Dean, College of Nursing, University of Cincinnati
Uma R. Kotagal, MBBS, MSc, SVP, Quality, Safety and Transformation and Executive Director of the James M. Anderson Center for Health Systems Excellence at Cincinnati Children’s Hospital Medical Center
Tricia Griffith, Claims Group President, The Progressive Group of Insurance Companies
Donna Jones Baker, President, Urban League
Dr. Belinda Miles, Provost and Executive Director of Academic and Student Affairs, Cuyahoga Community College
JoAnn Strasser, Partner, Thompson Hine LLP
Carolyn Cheverine, General Counsel and Secretary, Cliffs Natural Resources
“I am proud to recognize these extraordinary individuals, whose vision and commitment contributes to the advancement of diversity and inclusion within the workplace and community,” Dennis Kennedy said.
As part of the activities during the conference, Leena participate in the Most Powerful and Influential Women Roundtable along with JoAnn Strasser, Jennifer Belt and Tricia Griffith. The panel was moderated by Laura Thompson of Toyota.
Approximately 50 people attended the roundtable and heard the panelists discuss what it takes to become a woman of power ad influence in today’s world. They addressed how an individual gains the trust and credibility they deserve; the best career advice they received; what skills are essential for leadership; and other topics. The panelists also answered questions from the audience.
“Every day, an individual learns something new,” Leena said. “Don’t just take the easy way out. Don’t be afraid to take risks.”
Leena said honesty and transparency are essential to building credibility both within respective organizations and with customers.
The theme of the sixth annual Ohio Diversity and Leadership Conference was “Imagine Inclusion.”

“This year’s conference theme reminds us of the endless opportunities that inclusion offers to organizations as they commit to their diversity journey and beyond,” Jeanetta Darno said.
Dan Liggett is Communications and Public Relations Manager for geoAMPS, a technology company in the Columbus, OH, area that specializes in software solutions to manage land rights and infrastructure assets. For more information, visitwww.geoamps.com or call 614-389-4871.
This article also appears in:
Renewable Energy World