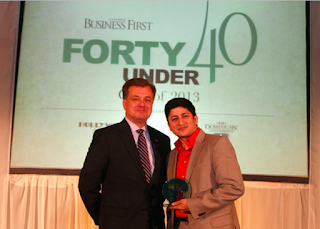 Yogesh Khandelwal, President and Chief Executive Officer of geoAMPS, was honored along with other members of the Forty Under 40 Class of 2013 during an awards ceremony May 23 in Columbus.
In introducing Yogesh to present the award, Ameet Patel, General Manager of Hollywood Casino, host of the awards ceremony, praised Yogesh’s technical knowledge and diverse business experience, culminating in the founding of geoAMPS. Patel told of the dramatic growth of geoAMPS, a company in only its third year.
Forty Under 40 is a prestigious honors program organized by Columbus Business First, a business news publication serving the Central Ohio area. Forty Under 40 honors 40 professionals in Central Ohio who are under the age of 40 and have distinguished themselves by their career achievements, awards and community service.
The longest-running program at Business First, Forty Under 40 marked its 21st year of recognizing young “movers and shakers” in the Central Ohio community.
The 2013 Class of Forty Under 40 includes business founders and executives, like Yogesh, as well as physicians, healthcare professionals, not-for-profit organization leaders, volunteers, attorneys, educators and public officials.
A panel of six judges reviewed approximately 200 nominations and support letters, scoring each nominee individually. The scores for each category, including career achievements, awards and community service, were combined for each nominee. The highest scores determined the Forty Under 40 Class of 2013.
“Only one in five people nominated were named to the list of Forty Under 40,” Don DePerro, President and Publisher of Columbus Business First, said.
See Yogesh’s responses to a Business First interview and photos from the Forty Under 40 event by clicking here.
Yogesh is the founder of geoAMPS, a technology company that offers an industry-specific software product line for right of way, alternative energy, oil and gas, transportation, railroad, land reclamation, surveying, geographic information system (GIS) mapping, document management, and telecommunications. geoAMPS’ growing list of clients includes leaders in their respective industries.
Yogesh has more than 15 years experience in database customization and implementation across several industries. He holds two master’s degrees in civil engineering.
geoAMPS was a semifinalist for the Outstanding Startup Business award in the 2012 TechColumbus Innovation Awards. Companies in Central Ohio that are less than five years old and have fewer than 250 employees qualified for the award. In order to be considered for the Outstanding Startup Business award, the business must have developed a technology innovation that is groundbreaking and/or superior to the market alternatives. The company must have made an impact on the target market, and shown evidence of historical growth and measurable projected growth.