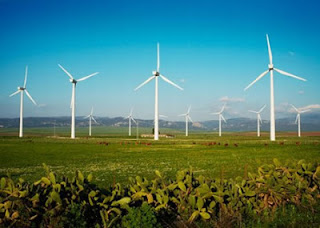 Much of the attention surrounding legislation passed by Congress over the New Year’s holiday to avert the so-called “fiscal cliff” has focused on taxes on individuals and households.

Another aspect of the deal struck by the White House and Congress is the extension of the production tax credit (PTC) and Investment Tax Credit (ITC). Although somewhat below the radar of news accounts of the legislation, the extension is a major victory for the wind energy industry and could have far-reaching ramifications for domestic energy production.

The Renewable Energy World online newsletters report that extension of the PTC and ITC is expected to save up to 37,000 jobs and create more jobs over time. It also is expected to revive business at nearly 500 manufacturing facilities across the country. In recent months, manufacturing to support the wind energy industry declined in anticipation that Congress would fail to reach accord over extending the tax credits. Thousands were laid off.

Half of the U.S. jobs in the wind energy – 37,000 out of 75,000 – and hundreds of factories supplying turbines and related parts would have been at stake had the PTC been allowed to expire, Renewable Energy World cited from a Navigant Consulting study.

Extension of the wind energy PTC, and ITC for community and offshore projects, will clear the way for continued and future growth of the energy source that installed the most new electrical generating capacity in the United States over the past year, the American Wind Energy Association (AWEA) reported.

U.S. wind installations were set to exceed 12 gigawatts by the end of 2012 as developers rushed to finish projects before the scheduled expiration of the PTC. That would surpass the record 10 GW realized in 2009.

Bloomberg New Energy Finance data noted that had the PTC not been extended, wind installations could have dropped 1.5 GW in 2013. There still could be a significant decrease in installations relative to previous years because Congress waited so long to act.

Extending the PTC could cost taxpayers as much as $12 billion as operational projects continue to receive the credit over the next decade. PTC opponents cite the cost of the tax credit and also contend that most wind farm projects still would be built by lowering other costs and possibly raising the price of the energy produced.

The PTC allows 2.2 cents per kilowatt-hour of energy produced over 10 years by new wind energy facilities. The tax extension applies to projects that will begin in 2013, but not operational until 2014.
geoAMPS, a technology company located in the Columbus, Ohio, area, offers software solutions that supports continued expansion of wind energy. geoAMPS provides an industry-leading comprehensive solution for end-to-end management of wind and other alternative energy projects in a paperless environment. Its product altAMPS assists wind companies through the development, construction and ongoing operational stages of wind farm projects, delivering process efficiency, error elimination and measured cost savings.

Like the PTC itself, such product capabilities and cost savings serve as an incentive to add even more wind installations, thereby increasing the nation’s commitment to clean, renewable energy and decreasing dependence on fossil fuels and foreign sources of energy.

A myriad of complex issues factor into the siting of a wind farm and multiple turbines within a wind farm space. altAMPS provides the capability of sorting through these many issues and arriving at the most optimal siting decisions.

Wind energy industry officials report their number one pain point is managing ongoing payments. altAMPS provides the tools needed to help meet these ongoing obligations in an accurate and timely fashion. Tools such as royalty payment calculator, lease management and payment tracker and scheduler make that process more efficient. Tasks that once took several days to complete by utilizing multiple spreadsheets can now be done in minutes with altAMPS. The software also ensures payment accuracy.

The Web-based software makes it possible for right-of-way agents to access the most current information and input updates in the field through a smartphone, computer notebook or laptop. There is a detached application when Internet connectivity is nonexistent or unreliable. The information is synced into the system once a reliable connection is restored.

As renewable energy projects increase with the extension of the PTC, so does the need for technology to help in the development and management of those projects. altAMPS, and other products offered by geoAMPS, is technology which meets those needs.