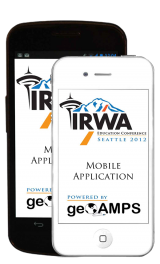 In June, the geoAMPS team had the opportunity to attend the 58th annual IRWA Education Conference in Seattle, Washington. During the conference our team members introduced conference attendees to geoAMPS technical know-how, making a big splash.
When the geoAMPS team realized that the IRWA Conference did not have a mobile application, we seized the opportunity to show what we can accomplish in a short amount of time. After two phone calls with IRWA headquarters we had the go-ahead to create an interactive mobile application for both the Apple and Android mobile platforms. With only three weeks before the start of the conference, and a one-week approval period, the IRWA app would provide a true test of geoAMPS famous two-week development cycle. Two weeks later, geoAMPS provided both Apple and Android apps to the IRWA for final approval and testing; passing with flying colors.
At the conference our team received great feedback about the app from attendees. The IRWA app allowed geoAMPS to showcase how mobile technology can be utilized to increase communication and facilitate information to flow freely between users, a capability that can be a blessing to projects. At geoAMPS, we are proud to be the only technology provider in the industry to offer true mobility to our users.
At geoAMPS we continued to invest heavily in our research and development to bring new and exciting improvements to all of our  products including mobile technology, and will continue to lead the industry into the future.